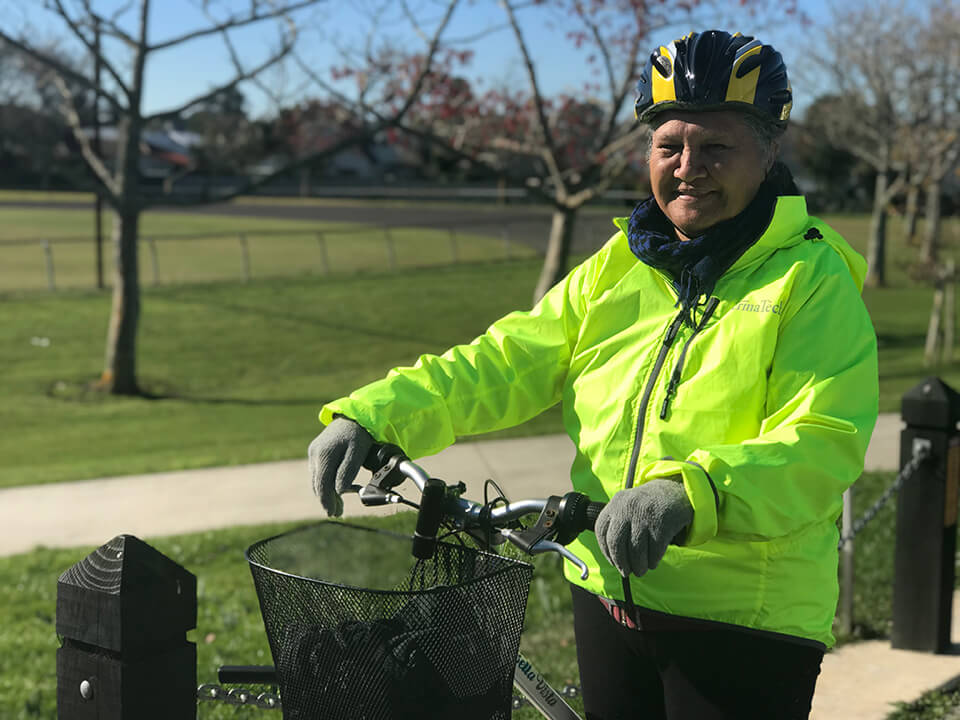 A number of our kaumātua are taking part in this year’s IronMāori so we were fortunate to be offered two cycling workshops and a bike from Cycling New Zealand this month.

During the first workshop, Cycling NZ’s Mike Young and Sean Christian took our kaumātua through several exercises at Hillcrest Stadium, focusing on balance and stability, and bike maintenance, while the second workshop culminated in a road ride.
Kaumātua, Piwi Kerns, says she used to do a lot of cycling but lost confidence after suffering a mini stroke at the beginning of last year. The 69-year-old also suffers from arthritis but was determined to get back on her bike.

“The first workshop was my first time on a bike since my mini stroke,” she says. “I was frightened to fall off but I’m glad I came because it’s given me the confidence I needed to get back on a bike. They encouraged me and have kept an eye on me.”
Mike says Cycling NZ work with people in the community who want to lead groups but also to provide adult education on how to ride a bike and be safe on the road. He says our kaumātua are inspirational.

“Some of them haven’t ridden a bike for 30 years but they just got on with it. We had them riding around the track in a safe environment, before introducing a set of cones to weave through. We taught them how to look forward and they didn’t even realise when we moved the cones in closer. It’s been pretty cool.”

Sean agrees it was a “cool opportunity” to work with our kaumātua.

“They’re heaps of fun and are still wanting to learn. A lot of people are a bit worried about coming back into cycling, but you know the old saying, it’s just like riding a bike? Well it is. Once they get over the nerves and confidence comes back, they’re away again.”

RKCT nursing manager, Katherine Holmes, says she’d love cycling workshops to become a regular event for our kaumātua because it helps promote wellness, strengthens legs and core balance, and helps prevent falls. She also says socialising in the sunshine’s good for the soul.

“Mike knows we don’t have the money to purchase a whole lot of bikes, which is what our overall aim would be. We want to get our kaumātua riding but the barrier is they don’t actually own a bike or it’s a bit hoha to borrow one. So, he’s kickstarted our little bike group and donated a bike which he’s done up. We’re very appreciative to Mike and Cycling NZ for that.”